HISTORY OF THE MARINE CORPS BIRTHDAY

History Of The Marine Corps Birthday 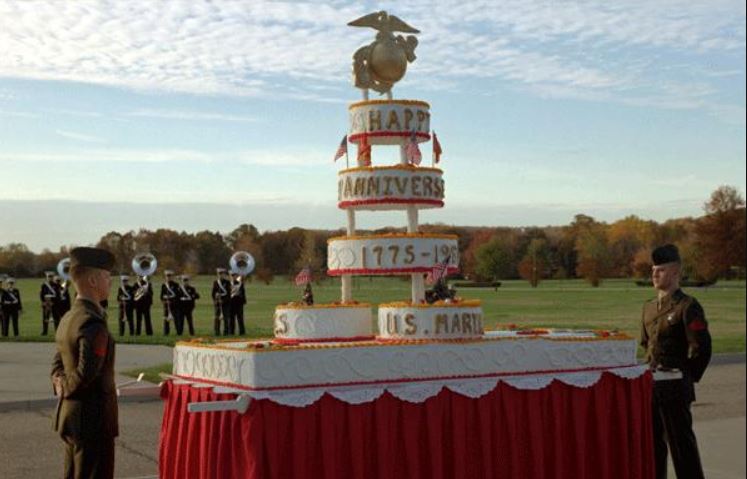 The U.S. Marine Corps begins preparations for its "birthday party" every summer. Activities become more feverish as the fall hues arrive. By early November, every Marine is either rehearsing his role in the "party" or pressing, polishing, and spit-shining in order to appear at his or her best for the Birthday Ball. This has not always been the case, however. In fact, Marines have not always celebrated their founding on November the 10th.

Formal commemoration of the birthday of the Marine Corps began on 10 November, 1921. That particular date was chosen because on that day the Second Continental Congress resolved in 1775 to raise two battalions of Continental Marines.

Until 1921 the birthday of the Corps had been celebrated on another date. An unidentified newspaper clipping from 1918 refers to the celebration of the 120th birthday of the Marine Corps on 11 July "as usual with no fuss." It is doubtful that there was any real celebration at all. Further inspection of documents and publications prior to 1921 shows no evidence of ceremonies, pageants, or parties. The July date was commemorated between 1798 and 1921 as the birthday of the Corps. During the Revolution, Marines had fought on land and sea, but at the close of the Revolution the Marine Corps and the Navy were all but disbanded. On 11 July 1798, President John Adams approved a bill that recreated the Corps, thereby providing the rationale for this day being commemorated as the birthday of the U.S. Marine Corps.

On 21 October 1921, Maj Edwin McClellan, Officer-in-Charge, Historical Section, Headquarters Marine Corps, sent a memorandum to Major General Commandant John A. Lejeune, suggesting that the original birthday on 10 November 1775 be declared a Marine Corps holiday to be celebrated throughout the Corps. Maj McClellan further suggested that a dinner be held in Washington D.C., to commemorate the event. Guests would include prominent men from the Marine Corps, Army, and Navy, and descendants of the Revolution.

Accordingly, on 1 November 1921, MajGen Lejeune issued Marine Corps Order No. 47, Series 1921. The order summarized the history, mission, and tradition of the Corps, and directed that it be read to every command on 10 November each subsequent year in honor of the birthday of the Marine Corps. This order has been duly carried out. 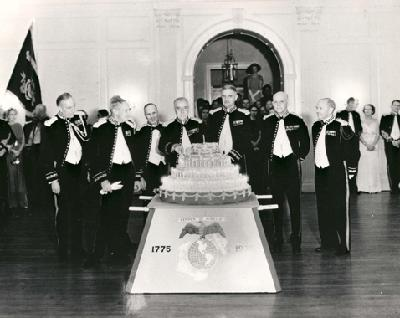 Some commands expanded the celebration during the next few years. In 1923 at Fort Mifflin, Pennsylvania, the celebration of the Marine Corps' 148th birthday took the form of a dance in the barracks that evening. Marines at the Navy Yard, Norfolk, Virginia, staged a sham battle on the parade ground in commemoration of the birthday. The battle lasted about twenty minutes, and was witnessed by Portsmouth and Norfolk citizens. At Naval Station, Guantanamo Bay, Cuba, the birthday was celebrated on the 12th, since a special liberty to Santiago had been arranged on the 10th. The morning activities included field and water sports, and a shooting match. In the afternoon the Marines won a baseball game, 9-8, over a Cuban team. In the evening, members of the command put on a variety show followed by four boxing bouts.

The first so-called "Birthday Ball," such as suggested by Maj McClellan, was probably held in 1925 in Philadelphia. No records have been located of one prior to 1925. Guests included the Secretaries of War and Navy, Major General Commandant Lejeune, famous statesmen, soldiers, and sailors. The principle event was the unveiling of a tablet on the site of Tun Tavern. The tablet was a gift from the Thomas Roberts Reath Post, American Legion, whose membership was composed exclusively of Marines. The celebration was held in conjunction with the annual convention of the Marine Corps League. A parade included Marines, Regular Army, and Navy detachments, National Guard, and other military organizations. The evening banquet was held at the Benjamin Franklin Hotel and a ball followed at the Bellevue-Stratford.

It is not possible to determine precisely when the first cake ceremony was held, but there is evidence of a ceremony being held at Quantico, Virginia, in 1935.

Also on record was one held at Marine Barracks, Washington, D.C., in 1937 where Major General Commandant Thomas Holcomb presided at an open house for Marine Corps officers. Ceremonies included the cutting of a huge cake designed after the famous Tun Tavern in Philadelphia.

From 1937, observances of the Marine Corps Birthday appeared to develop spontaneously throughout the Corps as if they had a life of their own. The celebrations were publicized through every media. Newsreels, motion pictures, and displays were prepared to summarize the history of the Corps. In 1943, standard blank Marine Corps scrap books were forwarded to all districts to be filled with 168th anniversary clippings, scripts, pictures, programs, and other memorabilia, and returned to Headquarters. Unfortunately none of these scrapbooks remain in official files. 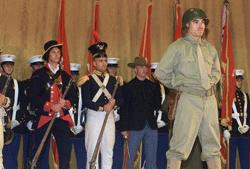 In 1951, a formal Birthday Ball Pageant was held at Headquarters Marine Corps. Similar to the pageant today, the script described the Marines' period uniforms and the cake ceremony. Although this is the first substantive record of a pageant, Leatherneck magazine of 10 November 1925 pictures Marines at a pageant in Salt Lake City, Utah, which had taken place "several years ago."

On 28 October 1952, the Commandant of the Marine Corps, Gen Lemuel C. Shepherd, Jr., directed that the celebration of the Marine Corps Birthday be formalized throughout the Corps, and provided an outline for the cake ceremony, as well as other formal observances. This outline was included in the Marine Corps Drill Manual, approved 26 January 1956.

Traditionally, the first piece of Birthday cake is presented to the oldest Marine present and the second piece to the youngest Marine present. When and where this tradition began remains unknown. Some records indicate this practice, and others vary it depending on the dignitaries present at the ball. First pieces of cake have been presented to newlyweds, the Secretary of the Navy, governors, and others, but generally speaking, the first pieces of cake go to the oldest and youngest Marines at the ball. 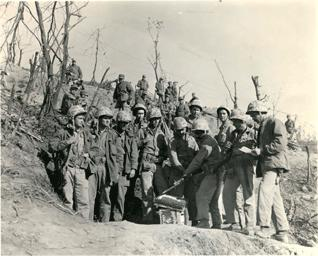 At present, celebrations of the Marine Corps Birthday on 10 November differ at posts and stations throughout the Corps. All commemorations include the reading of Marine Corps Order No. 47, and the Commandant's message to those assembled. Most commands sponsor a Birthday Ball of some sort, complete with pageant and cake ceremony as prescribed in the Marine Corps Manual.

Like the Corps itself, the Birthday Ball developed from simple origins to become the polished, professional function that all Marines commemorate on 10 November around the world.