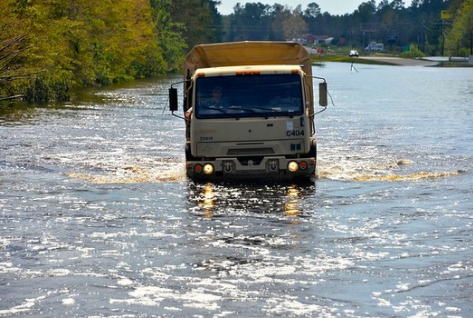 Hurricane Florence flooded more than 1,200 roads in the state in 2018, all while repair work from 2016’s Hurricane Matthew was still underway in some spots. While coastal cities bear most of the brunt of storms, Wilmington Mayor Bill Saffo said more inland communities are facing damage.

"A lot of those people are throwing up their hands and saying, 'Enough is enough, I'm moving to higher ground,' and saying, 'I'm not going to experience another flood. I've had enough,’” Saffo said.

"At the federal level, there needs to be a greater investment and prioritization of pre-disaster mitigation and resilience to help these communities get ahead of the next storm,” Tompkins said.

A Pew poll found 77% of Americans support a requirement that federally funded infrastructure in flood-prone areas be constructed to better withstand the impacts of flooding. And Tompkins encouraged congressional leaders to better account for future flood risk as they work to modernize the country's infrastructure.

"Just to make sure that when we build something, we're doing it right the first time,” he said. “Infrastructure is typically designed to last 40, 50, 60-plus years, so we need to account for risk throughout that design lifetime."

Saffo added flood-mitigation plans also should include larger stormwater ponds, upsized pipe infrastructure, and updated and expanded flood risk maps. While researchers predict a normal hurricane season this year, with up to three storms becoming major hurricanes, Saffo noted it only takes one to devastate a community.

"Something is happening in the environment that is triggering these events to take place more frequently, and the impact is much greater,” Saffo said. “And they seem to be much slower-moving storms, much wetter storms, which carry a tremendous volume of water."

Data from the National Oceanic and Atmospheric Administration shows the cost of damage from flood-related disasters has increased by tens of billions of dollars every decade since the 1980s.