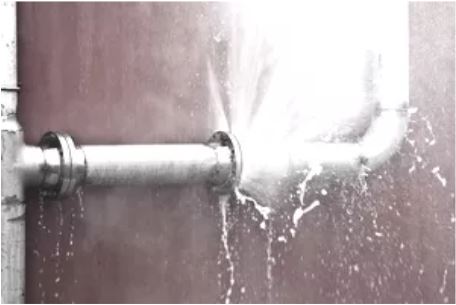 Many property losses experienced by business owners involve water damage caused by leaky pipes. Water can be very destructive whether it seeps from a loose fitting or gushes from a ruptured main. Fortunately, many types of water leaks are covered by a commercial property policy.

Most commercial property policies cover damage to covered property caused by any peril that isn't specifically excluded. While property policies contain a broad water exclusion, the exclusion applies mainly to flood and related perils like surface water, waves, mudflow, and the overflow of a body of water. It makes no mention of leaky pipes.

Property damage caused by water leaking from a broken pipe or appliance (such as a water heater) is generally covered under a property policy if the damage occurs suddenly. For example, suppose that a supply line to a water fountain in your office suddenly ruptures. Leaking water damages the floor near the water fountain. Assuming your property policy includes building coverage, it should cover the cost to replace the damaged floor.

Property policies also cover sudden water leaks from fire protective systems. For example, an employee of yours is positioning a ladder in your office to change a light bulb when he accidentally hits a sprinkler head. Water pours out of the damaged head, damaging office furniture. Your property policy should cover the damage to the furniture.

Note that property policies generally don't cover damage caused by water that backs up from a sewer, drain or sump pump. To ensure such damage, you can purchase sewer backup coverage via a separate endorsement.

Many water pipes are located inside walls, ceilings, floors, or other places that are difficult to access. When an interior pipe is leaking, you may need to tear out a portion of the building to repair the pipe.

Fortunately, most property policies cover the cost of tearing out and replacing any portion of the building you remove to repair damage to the plumbing system or an appliance (such as a boiler) from which water or another substance has escaped.

In the water fountain scenario described above, suppose that the supply line is located inside a wall. To gain access to the damaged pipe, you must remove a portion of the wall. Your policy should cover the cost to tear out and replace that portion of the wall.

Property policies generally exclude the cost to repair any defect to an appliance or system through which water or other material flows. However, they do cover the cost to repair or replace damaged parts of a fire protection system if the damage results in a release of water, powder, foam, gas, or some other substance used to suppress fires. Policies also cover the cost of repairing or replacing parts of the system that are damaged by freezing.

There are some types of water leaks that are typically excluded by commercial property policies. These include slow leaks and certain leaks caused by freezing.

A typical property policy excludes damage caused by water that leaks or seeps continuously for 14 days or more. This exclusion applies not only to pipe leaks but also to water in the form of humidity, moisture or vapor. It is intended to eliminate coverage for water damage that results from poor maintenance rather than a sudden accidental event.

For example, suppose that a clogged drain line in an air conditioning unit causes water to collect on the floor of your building. The leak is slow, so no one notices the water for several months. By the time the problem is discovered, the floor under the air conditioner has suffered water damage. Because the leak continued for more than 14 days, your insurer refuses to cover the damage to the floor.

A common cold weather hazard faced by business owners is a frozen water pipe. When a pipe freezes, water may slow to a trickle or not flow at all. The pressure inside the pipe from expanding ice may eventually cause the pipe to burst.

Many property policies contain a "freezing" exclusion similar to that found in the ISO property policy. The exclusion precludes damage caused by water, other liquids, powder or molten material that leaks or flows from plumbing, heating, air conditioning or other equipment caused by freezing. This exclusion contains three exceptions. It does not apply:?

Pipe leaks can lead to mold. Many property policies exclude damage caused by mold (typically called fungus) but add back a limited amount of coverage.